How To Run Android OS & Apps on a PC and Mac 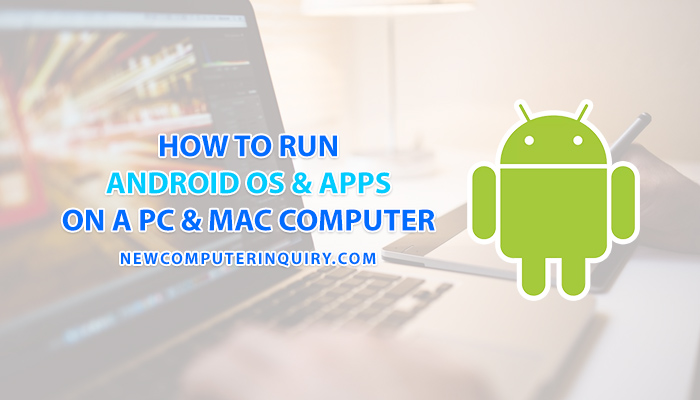 Android OS has a lot of interesting features and programs that would look amazing on a high-definition
computer monitor. The mobile phone experience is great, but when it comes to playing games, watching
movies, creating graphics, publishing documents, or anything else that is similar, using a computer will
always be the far superior option.

Your mobile phone running the Android OS may be limited on space or may have a slow processor. By
installing a program that can run Android on your computer, those problems are eliminated. Because you will
be running Android on your desktop computer, you will have full access to the Google Play app store that
has hundreds of thousands of apps for you to install and run.

The Android OS adds additional functionality to your existing computer. Below are a few programs that you
can download and install to get started running Android OS.

BlueStacks is the leader when it comes to running Android OS on both PC and Mac computers. BlueStacks has a
clean interface and makes running Android Apps a breeze. Depending on the speed of your computer,
installing and running games is fast and simple. Download Sonic The Hedgehog, Mario Kart, or any other
popular game. Then connect a USB Gamepad Controller and start having fun.

The days of watching movies on a small screen are over. Download popular apps such as Tubi TV, Terrarium
TV, Amazon Video, and more. BlueStacks does not limit you on the amount of apps you can download. As long
as your computer has a minimum of 2 GB of memory, and a hard drive space of at least 4 GB, then you are
good.

Memu Play is similar to the BlueStacks emulator, but it’s sole purpose is for gaming. Once you are
connected to the Google Play store, you have access to thousands of games that becomes optimized for your
computer. Use your mouse and keyboard as controllers or go ahead and connect your USB gamepad for a more
personalized experience.

A great feature on Memu Play is the multiple instance option where you can use multiple accounts for the
same game. You also have the ability to play multiple games using the same account. Play the latest Call of
Duty, Fortnite, and Final Fantasy game in high-definition on your computer. Memu is only available for PC.

Why BlueStacks is the leader is simply because it allows Android OS emulation directly inside a computers
default OS environment. The apps listed below don’t have such an option and can only run as a separate OS
when booted.

In order for you to get started with installing and running an Android OS, you have to first download the
ISO image file and load it onto a USB Flash Drive. Once you restart your computer with your flash drive
plugged in, you will have the option to boot from your Windows/Mac OS or from the Android OS. Selecting
Android will boot your computer into that operating system.

Once installed, you can head over to the Google Play app store, sign-in with your Google Account, and start
downloading apps. The option of installing Android as it’s own separate operating system instead of as an
emulator has it’s advantages because you get to use the whole computers resources. Running an emulator like
BlueStacks and Memu Play, you have to share system resources with other programs.

Running an Android-based Operating System extends the possibilities of your computer. It enables you to
have access to over millions of apps and gives you the ability to run those apps on a high-definition
computer. Another plus is that you can simultaneously access both Android OS from either your computer or
mobile phone. Install apps that allow you to share screens or data, fully extending the features of both
devices.