An electronic device such as a desktop cater to many wide range of uses related to working, entertainment purpose, etc. It is an important part of desktops to provide entertainment or entertainment facilities at any possible way. Gaming is one the biggest modes of entertainment at present. Building or creating a perfect and full capable gaming rig which guarantees holding up under pressure is not at all easy. CybertronPC is one such creator of impressive gaming machines. Desktops you order are assembled and thoroughly checked by experts who give you an amazing gaming machine of which you can boast off.

CybertronPC Hellion GM1213B Desktop is a brand new next level gaming machine by them. It is quite a cost efficient gaming computer. It’s available in four different colors. It is promised to be impressive and is expected to support most game plays. CybertronPC Hellion GM1213B comes with a speedy and powerful AMD FX 6300 3.5 GHz processor combined with awesome RAM and high tech graphics card or video car. This provides more speed and more performance unlike any other machine. A huge storage space is present where you can not only create a game library but music, pictures, movies, videos, etc. It involves never seen before front fan controls, an LED panel enabling you to set lights as per your mood and lots. Like other PC’s, a DVDRW optical drive will be also present.

When it comes to specifications, the CybertronPC Hellion GM1213B Desktop surely won’t disappoint you. It comes equipped with an AMD FX 6300 processor which has a clock timing of 3.5GHz. It has 16 GB RAM. As of now there are no such application in the market which can use that much of temporary storage space, therefore you won’t have to worry about upgrading you RAM in the near future. In order to provide a superior gaming experience, it comes with a 2GB GeForce GT640 graphics card. There would be an internal power supply rated at 400 watts. It weighs around 27 pound and is quite large even for a gaming computer.

There is an integrated fan control panel in the front which will come handy if you are playing any high intensity game. There is also another PCI-E x16 slot for an extra graphics card. DVI and HDMI both ports are available if you want to connect to your monitor or even a high definition TV.

CybertronPC Hellion GM1213B Desktop is an excellent choice for a gaming computer at such effective price range. Most modern games and other applications run on this PC pretty well without any glitches. Up gradation procedure is also pretty easy. With 16 GB of Ram, it can run many applications simultaneously.

There are no major faults with the CybertronPC. Though some people may argue that the internal power supply is pretty low, it doesn’t cause any major problems. 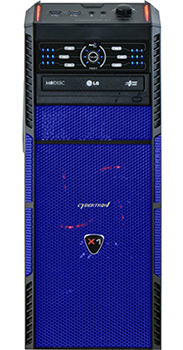 Measuring the pros and cons, it can be concluded that when it comes to gaming computers CybertronPC Hellion GM1213B Desktop can be rated pretty highly. It can be upgraded as per your requirements. We also great reviews on high performance gaming laptops for you to choose from if you want to take your favorite games with you so you can play anywhere you want.