A functional computer that boasts easy expansion at an unbeatable price, the Dell Inspiron i3847-5078BK is a great option for anyone looking for a fully capable, modern desktop. Released in early 2014, the Inspiron i3847-5078BK features a powerful and compact design that gives great performance in a streamlined package. The computer comes with a clean hard drive that isn’t loaded down with preinstalled programs, so you have close to one terabyte of memory free to install future programs.

Specifications for the Dell Inspiron i3847-5078BK

The Dell Inspiron i3847-5078BK is a solid computer that works great in a home office or for personal use. It’s small enough to fit almost anywhere, so the computer could also be used as a home media center. The PC has an HDMI out, so there won’t be any issues if you want to use an HDTV as a monitor. 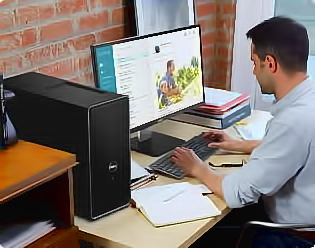 There aren’t any speakers built into the case, but the PC has a 5.1 surround sound chip that can be connected to the majority of speaker systems. The Dell Inspiron i3847-5078BK comes with a standard computer keyboard and mouse that can be replaced with other aftermarket devices depending on your preference. The Dell also comes pre-programmed with a free trial of Microsoft office and some McAfee virus protections software.

Fast and reliable, the Dell Inspiron i3847-5078BK comes highly recommended by users and tech sites because it offers superior performance at a competitive price. Dell has a long history of producing quality computers, and this one is no exception. The desktop gives the user powerful onboard graphics and computing power with plenty of open slots to add a new graphics card, more RAM, or an additional hard drive. The Inspiron i3847-5078BK is optimized to work well with almost any application and functions superbly with day-to-day functions. Whether it’s running business applications, browsing the web, or playing video games, the Dell Inspiron i3847-5078BK outperforms its competitors.

The Dell Inspiron i3847 is definitely one of Dell’s superior desktop computers on the market. If you are also interested in their line of dell laptop computers, they have a great selection of products to choose from. We listed some more great reviews for you to help make a strong purchasing decision.