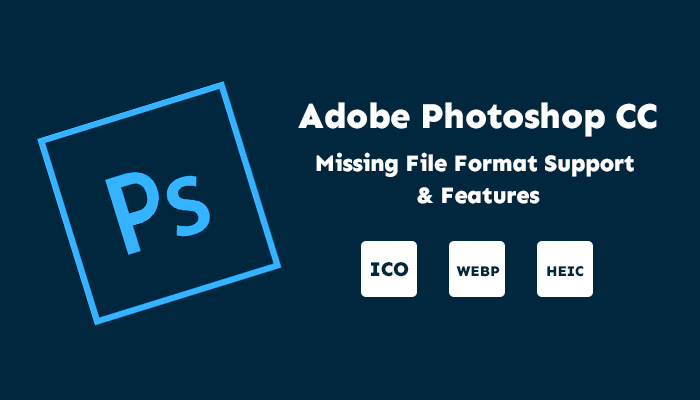 Photoshop is the industry standard software when it comes to creating and modifying images. Image formats that are very common and that can be found used often on the internet are JPG, GIF, BMP, and PNG.

What about other miscellaneous file formats? Shouldn’t the leader of all photo editing be able to support all available formats as they come out? The answer is yes.

Here are the following file formats that are not currently supported (out-the-box) by Adobe Photoshop:

The ICO file format is used for desktop icons found on Windows. Want to create your own custom icon for a new or existing program? Being able to create one in Photoshop would make that easier.

An alternate solution would be to first create your icon image in Photoshop, then save the final design as a PNG or JPG. Use an Image to ICO converter, and you are all set with a desktop ICO image.

The WEBP file format is used on the internet to provide images with both lossy and lossless compression. Excellent for those who want to keep the resolution in their graphics sharp and clean without the overhead of a large sized file.

To create a WEBP file, you will have to first create your logo or design in Photoshop, then save as a PNG or JPG. Use an Image to WEBP converter to save the result. Now you can upload your WEBP file onto your website.

The HEIC file format can be considered version 2 of the popular JPG image format. It’s sole purpose is for individual images and image sequences. The HEIC file can store double the amount of info compared to it’s JPG counterpart. This allows for a much higher resolution JPG image.

Photoshop may not be able to open or modify this file, but Adobe Lightroom and a host of other programs can. If you are looking to convert to another image format, consider using an HEIC to JPG converter. This will allow you to then open in Photoshop.

For the above mentioned file formats to work, they will require you to either download or  purchase additional Photoshop Plugins (extensions) or to use a different image editor all together.

Another shortcoming that Photoshop users will experience is trying to open damaged files or incorrect formats. Instead of Photoshop having a feature that can attempt to repair the file, it won’t at all. If the image you are trying to open is in the wrong file format, don’t expect Photoshop to fix that for you either.

While Photoshop has it’s limitations, overall it is still an amazing image editor with a host of features. With the ability to install plugins to add-on to the already growing list of capabilities just makes Photoshop a superior product. But, if Adobe can support additional file formats and have a repair feature included in the final product, Photoshop won’t ever have to worry about losing it’s place as the industries first choice for editing images.